The Sound of Waiting

on May 04, 2018
Heavy material, performed with unrelenting emotion, the Sound of Waiting was a poignant, magic-realist work on refugee experience, evoking the terror of homeland and the battle against the odds on a fatal approach to Australia. Written by Mary-Anne Butler and directed by Suzanne Periera this work explored  the strength of the will to survive and how far the human spirit will extend when there is no alternative option. It was a privilege to be part of a work of such political importance which reached large audiences with great reviews.  It was my first endeavour with Darlinghurst Theatre in their process of intense psychological questioning of the line between the actor and reality particularly for lead actor and child refugee, Reza Momenzada.
The projection design was a single front projection onto a semi-circular, retracting tule curtain with floating panels of grey gauze behind.

We scored a week in Bundanon at the end of October, courtesy of Rosie Dennis.  I spent a week animating a gum tree stick-railway network which took a lot longer than expected.  I was trying not to go too feral but it is hard, trying to ignore wombat tantrums under the floor boards and unacceptably happy Friar birds out the front window of the studio.  I can't concentrate with all these noises of nature.  Shifting from urban insomnia to crazed, ethanol fuelled bull screams in the dead of the night echoing across the valley and daily spiders in the bed. 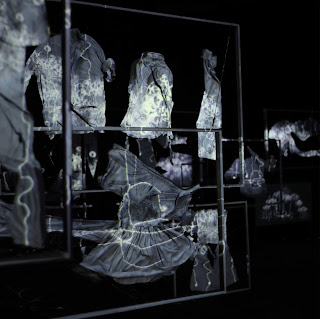 The State of Fleeing

PANIC EMBRACE, made for BLIK BLIK 2020 festival in the Czech Republic metamorphosed into a 360VR work during the lockdown (see link below) after a successful installation in DEPO2015 Pilsen.  It was made by projecting onto a collection of eight suspended frames of disassembled pieces of clothing in a 10 metre wide array to increase dimensional perception of each item being affected by the superimposition of chaotic, monochromatic drawings. The drawings were made with the sense of waking and sleeping brain cycles and repatriation, like a person passing through life threatening experiences, possibly dying or being transformed and coming out the other side. They are made in the liminal state of brief hesitation, realising one's life is at stake. From the initial RFS command during the bushfires in NSW "stay and fight or leave now", seeing people driving through walls of flames bleeding into a global Coronavirus pandemic, suddenly everyone is faced with mortality, not j 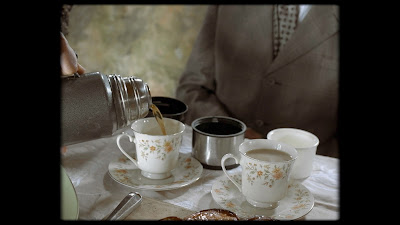 Conceived by performance maker Alan Schacher with WeiZen Ho, Katia Molino, Philip Mills and others, SKELTER SHELTER was a video experiment made with the assistance of the Blue Mountains City of Arts Trust exploring the picnic rock shelters in Katoomba which were built and designed by Tom Adam in the 1930's. Picnickers chose a cold, rainy day to have an outing inside one of the faux rock grottos only to be subsumed by the gothic spirit of the mountains. 4K video in 4:3 ratio, 9.45 mins Sound by Rik Rue and Boris Baberkoff Skelter Shelter on Youtube © Alan Schacher and Samuel James 'filmstrip' panorama from 4K stills (2020)