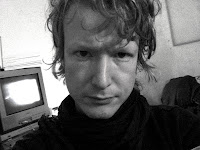 Sam James has been a filmmaker and projection designer for performance since 1995. His focus has been to collaborate with new media, dance and theatre projects to develop integrated, paradoxical languages in live performance. He has been a regular contributor to Performance Space for ten years also filling a role as video documentor for many independent dancers there. His approach to the moving image is to unveil paradoxes between media and the live presence and being seduced but complicit in the manipulations of the stage.  Most of his work involves animation of abject subconscious, environments and objects, playing with and against the performer.  He trained in architecture and film and has been a set designer and made successful super 8 and 16mm films such as Nun's Night Out (winner best dance film, Australian Dance Awards 2006). He has screened dance films in Cinedans Amsterdam, MOVES Manchester, VideoDansa Barcelona, Dança em Foco Rio de Janiero, Tansfilm Wetbewerb Berlin, Video Danza Buenos Aires, MediaTerra Athens, Reeldance in Australia and NZ and the Experimental Media and Performing Arts Center, New York. Although he spends most of his time working on small, independent developments he regularly contributes to the major festivals in Australia, from Adelaide to Perth to Alice Springs.