An Inter Arts Grant, Gail Priest and I produced a one week development with 2 showings at Carriageworks, Performance Space.
I designed two large 16:9 screens with some expensive front and rear projection diffusion cloth, suspended in Track 12. Technically analogue, feeding into three vision mixers but from a combination of live camera objects (Nick Ritar, Cicada, VIC), Isadora (Scott Morrison, NSW) and Arkaos with a Numark mixer (myself) developed two, 45 minute sequences in which we each crossed over with sound artists, Gail, Jason Sweeney (SA), Peter Newman (NSW video also) and Ai Yamamoto (VIC). We had a great week, trying to produce something that wasn't the usual solo-artist-type event where we would overlap and create new partnerships. The plans of setting up half outside was impossible because of the floods going on out there, so we had immersion inside. 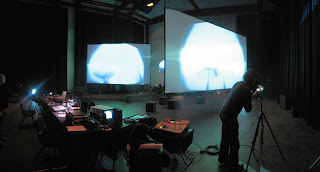